We’re a third of a year into this whole Nathan thing, and wow.  It’s been a big month for us in many ways, including:

Unfortunately, Nathan got his first ear infection(s) this month as well–in both ears.  Poor little guy was pretty miserable a few evenings last week and he’s been off his feed and his sleep schedule since.  But we’ve got him on an antibiotic and he’s returning to normal, slow but sure. 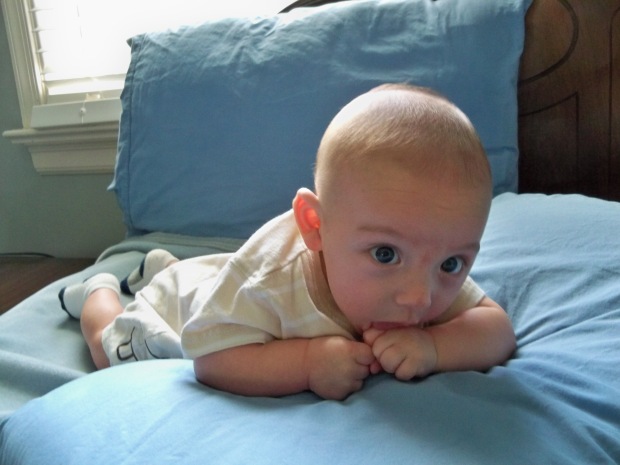 Before getting sick, Nathan had dropped his middle of the night feeding!  (He’s since picked it back up, but hopefully not permanently).  He was going 8-9 hours between bottles at night.  He wasn’t sleeping that whole time–but we were still able to catch a few extra winks for a week or two.  On a normal, healthy day he was eating 5-7 oz every 3-4 hours.  We still have him exclusively on formula and will try to keep it that way for another month or two.  We’ll see if he’ll let us!  He hasn’t expressed interest in table food yet, so I think we’ve easily got a few more weeks before he’ll notice anything but his bottle.

Nathan is smiling often these days and laughing, too–what fun!  His eyes remain in the 99th percentile.  🙂  He loves to lay on the floor and kick or “stand” in our laps and bounce.  Picture books have captured his attention, as have stuffed animals.  He is strong enough to sit now if he’s supported by an armchair or a pillow.  He has become increasingly vocal–both with happy coos and caas of protest.

Naptimes still fluctuate some, but usually Nathan eats (he cut his feeding time in half this month when we upped him to a bigger nipple!), gets a diaper change, plays for an hour or two, and sleeps for an hour or two.  This cycle usually takes 3-4 hours, and it works pretty well most of the time.  During the day, he usually naps on his side or in his carseat.  At night, we still swaddle him and put him on his back in his crib.  He’s starting to fight the swaddle in the wee morning hours, so usually we swap it out for some snuggly pajamas around 5am.

This entry was posted on July 19, 2012, 2:14 pm and is filed under My Life. You can follow any responses to this entry through RSS 2.0. You can leave a response, or trackback from your own site.