Are you smarter than a 5th garder?

(Sample questions from the test I’m giving on Monday)

Do you know what the distinguishing attributes of amphibians are?  Reptiles?  Mammals?

Can you list 4 of the 11 organ systems of the body, what they do, and at least 1 organ they each use to do it?

Are you smarter than a 5th grade teacher?

(Sample questions from the curious students I teach)

Did dinosaurs get tooth decay?

Why do tigers have stripes?

Why is a platypus a mammal if it lays eggs?

How long are the intestines put together?

How do Chameleons change color?

How do frogs ribbit?

How many teeth to crocodiles have?

What is the biggest frog in the world?

Do all mammals have fingers and toes?

How long can mammals hold their breath?

((What I would do without google, I don’t even know.))

The Garden of Eatin’

Being a Colorado girl myself, and having a firmly instilled frost date of May 15, it remains a source of constant surprise and delight to my soul that February (yes, February) is when green thumbed Richmonders begin to plant their gardens.

Excuse me while I swoon.

In February in Colorado, we were still busy ice skating and snow tubing.

In February in Richmond, spring is right around the corner.

Take last week for example: the thermometer read above 50 degrees F every day.  Substantially above 50, in some cases.

With that in mind, can you blame me for jumping on the garden-frenzy band wagon?  No, you cannot.  Neither can I.  Which is how I found myself trotting around the yard several afternoons of late brewing up trashcans full of compost and upturning rows of dark brown dirt.

I should stop at this point and inform you that by “upturning rows of dark brown dirt”, I am speaking of the old fashioned hand-to-pitchfork method as opposed to the newfangled notion of rototilleration that has sprung up among so many.

This becomes significant in light of how sore my back is right now and how little progress I’ve made on upturning the soil in my garden plot.  But we’ll get to that later.

No, actually, as a matter of fact, let’s talk about it now: my back is stiff and sore from hours of back-stiffing-and-soring labor, and I have progressed at such a great rate through my grassy yard that the upturned area now rivals a baby blanket in size.  Furthermore, in addition to such astounding success, I am developing biceps of steel.

But I’m getting ahead of myself.

Let me back up and start at the beginning.

Three Christmases ago, mere weeks after my enchanted engagement to the love of my life, my delightful and insightful siblings gifted me with a beautiful red pitchfork.

It was a real beauty, this red pitchfork.

Of such pitchforks, dreams are made.

Two summers ago, mere months prior to my marvelous marriage to the live of my life, said pitchfork broke ground on a little tiny garden in Tim’s grandfather’s backyard.

It was a real beauty, this little garden.  It grew and prospered and began to bear fruit.  And just as we were about to reap the glorious firstfruits….the very thoughtful and generous neighbor accidentally mowed it.

Last summer, the pitchfork again made an appearance…this time in our very own backyard.  It faithfully upturned a small plot, which was then planted with such delicacies as tomatoes, peppers, chiles, spinach, carrots, herbs, etc–and then diligently weeded, nursed, and cajoled only to be pretty much fried by the hot-hot sun.  I’m pretty sure I harvested 8 lettuce leaves and 2 snap peas…total…before the whole thing proverbially scorched.  Went up in smoke.  Burnt to a crisp.  Withered to dust and ashes.  Etc.

But now it’s this year.  And this year, my friends, will be different.

For one, I moved my plot to the front yard, where I think it will be less likely to be trompled, mowed, stomped, or fried.

Second, I’ve made the difficult decision to use *gasp* house water in the event of a drought emergency.

Finally, my very own beloved greenhouse that I’ve been working at for the last three weeks is going to grow my starts for me.  Which means they’ll begin life with a much better chance of survival than previous seedlings have enjoyed in my windowsill.  Thanks, Greenhouse!

In light of all these things and more, I’ve been digging away out there like a possessed mole.  Or vole.  Or whatever dirt digging creature it is that owls eat and then barf back up for enterprising 4th graders to analyze in science class (guess what lucky class learned about digestion today?).

I’ll keep you posted as to my trusty red pitchfork’s progress, as well as update periodically on how, where, when, and what I plan to plant.

But I will tell you this now:

I’m pretty much all about counting my tomatoes before they’re ripe.  And tasting them, too, while I’m at it.  And boy, is it going to be one yummy summer. 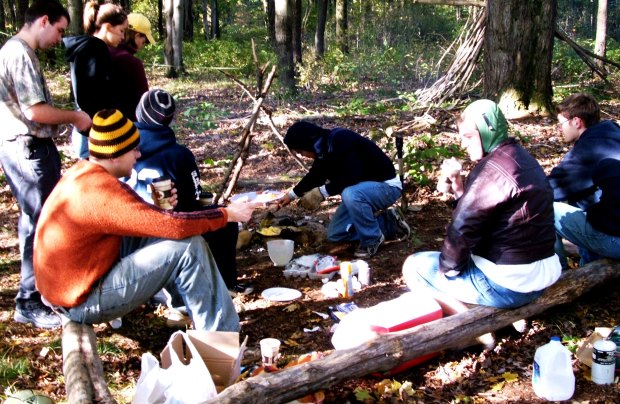 The good old college days: when the boys cooked us breakfast over a campfire. How times have changed! (Actually, Tim does still make me breakfast every so often.)

A madly skilled kitchen fiend whirled through our kitchen yesterday, and here’s what she left behind: THE best meatloaf I have ever tasted, an amazingly simple new kitchen trick that’s cheap and healthy, and a product review.

Double Cheese Meat Roll (courtesy of one of my favorite church cookbooks ever ((3rd Presbyterian of Richmond)), the knowledge and possession of which I credit to the amazing Ames family ((Thanks, guys!!)))
1 1/2 lbs ground beef
1 egg
3/4 cup cracker meal, bread crumbs, or wheat bran (I used wheat bran)
1 8 oz can tomato sauce, divided (I used spaghetti sauce)
1 tsp seasoned salt
1 tsp oregano
1/2 tsp pepper
3/4 cup mozzarella cheese
3/4 cup cheddar cheese
Combine ground beef, egg, crumbs, 1/2 tomato sauce, and seasonings.  Mix well and shape into a flat rectangle on a sheet of waxed paper (I didn’t have wax paper, so I flattened mine on a cutting board).  Sprinkle the grated mozzarella and cheddar cheeses over the meat mixture.  Roll up like a jelly roll and press ends of roll to seal.  Bake in a loaf pan for 50 minutes at 350.  Top with remaining tomato sauce, bake 15 minutes more.  Serves 6.

Seriously, this meat loaf was super uber tasty.  And not that hard!  The cheese made the meat so moist and flavorful.  YUM.  Definitely a new family favorite.  I served it with baked potatoes (more on those in a minute), steamed mixed veggies, and applesauce.

Vegetable Broth
For 25 years (okay, maybe not quite), I have been boiling frozen vegetables and pouring off the excess water…right down the drain.  And for 25 years, I’ve cringed just a bit inside.  I mean, who hasn’t read those articles about how vitamin rich that waste water is?  I’ve known people who drink the extra fluid for health benefits, and believe me, I’ve tried it.  NOT my thing.  Solution: drain that extra vegetable stock into a glass canning jar (or any empty container) and stick it in the fridge!  It will keep for weeks…and you can add it to soups, use it to cook rice or pasta, make gravy with it, and generally substitute it for water in almost any dinner cooking.  Seriously, this is revolutionary.  No more store bought broth!  No more wasted nutrients!  How has it taken me so long to figure out something so simple?!  Excuse me while I go bang my head against a wall.

Schwan’s #851
If you are a Schwan’s person (I am not, but Pop is), may I humbly recommend Schwan’s #851 Roasted Baby Bakers.  It’s a bag of cute little potatoes that have been pre-seasoned and baked.  All you gotta do is heat ’em up.  And they are great.  Especially with Double Cheese Meatloaf (recipe above).  Not too seasoned.  Not too greasy.  Not too messy.  I have no idea how much they cost.  I’m sure making your own roasted baby bakers is much, much cheaper.  But since I don’t usually like pre-prepared food, I thought this one was worth sharing.

There you have it!  Various and sundry magic tricks for the cook.  Have you hit the nail on the head in your kitchen  lately?  Do tell!

How To Make A [Fake] Cloth Tape

or A Picture Tutorial In Honor of My Missing Camera Cord 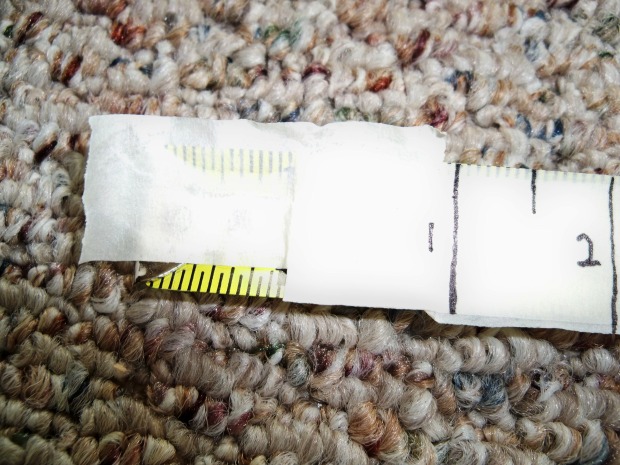 And now, an update:

I wore my fingers to the bone cleaning.  Not really.  But I’m quite impressed with myself, nonetheless.  Here’s what I did:

Pop added to the general cleaning flurry by doing his laundry and vacuuming his room.

How this house can contain all this cleaning energy, I don’t even know.

Here’s what I didn’t get done:

Hopefully my motivation will extend into next week, and I can actually have the whole house clean AT ONE TIME!!  That’s never happened before.  If I do, I promise to post a long-overdue house tour for all those who have never come to visit (please!  come visit!).

It’s a great feeling to sit here with sore arms and sore feet and sore shoulders and a sore back…and a long list of things accomplished.  Probably because it’s such a rare achievement for me.  I better enjoy it while I can…because I’m sure things will be back to normal (read: messy) far too soon!

Playing catch-up today, which may or may not involve blogging a bit later on.  It depends on if I can accomplish my mission: to whip this house into shape!  Even though it snowed this morning (a mere light dusting), spring is still on the way.  I know it is.  It has to be.  Spring cleaning, here I come!

Aforementioned whipping may involve any/all of the following (the sky’s the limit!): sorting, debating, trashing, regretting, untrashing, organizing, rearranging, painting, baking, cleaning, dusting (GASP, my leeeeeeeeeeeeast favorite chore), scrubbing, discovering, getting distracted, and collapsing in a heap on the couch to read a book I just borrowed from my pastor’s wife: Aunt Jane’s Hero by Elizabeth Prentiss.

Shout out to me for getting all the laundry done and folded yesterday.  And for having leftovers enough to cover all of today’s meals.  Such things are essential to a spring cleaning splurge’s success.

DoubleKnotted
Create a free website or blog at WordPress.com.